I don’t consider myself to be a religious person, but I do have a very strong link with the Shady Grove Unitarian Church, set amongst a bush block off dirt roads near Littlehampton. There are a number of reasons for this. Firstly, there is a strong family connection with the place. My Great Great Grandfather on my Mother’s side, Frederick Charles Smith was the ‘Preacher’ for many years, and a member of one of the original families who built and established the church. Frederick and his wife are buried in the adjoining Shady Grove Cemetery, as are both of my parents. In addition, the founder of the church, and the man who donated the land  is also my Great Great Grandfather on my Mother’s side. My Mother’s Father was Cecil Smith, grandson of F. C. Smith, and son of Ernest Alfred Smith. Ernest Alfred married Editha Monks, the daughter of the founder of the church, John Monks.

The Unitarians are not set in their ways. They do not use the word Christian in their definition, and although they consider Jesus as a special person whose values they respect, they do not accept the Trinity, the Resurrection or ‘Son of God’ as part of their beliefs. Indeed the Unitarians have no fixed dogma at at all. Thus one may attend a service which contains the music of Bach, readings from Buddist texts, or anything from the wide range of human discourse and philosophy. 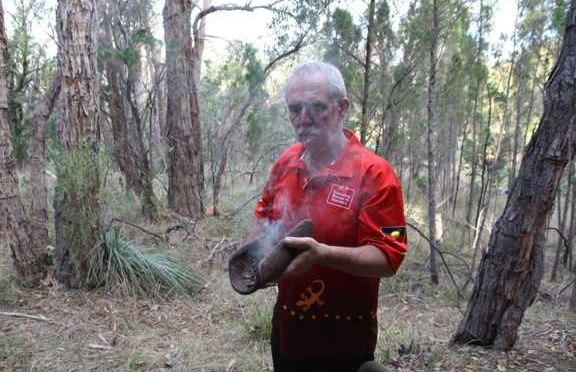 Accordingly, I was not surprised, but certainly delighted when I heard that a traditional Aboriginal ‘smoking’ ceremony was to be held as a part of a recent service at the church. In particular, the smoking was to be conducted by a descendant of the traditional Peramangk occupants of the Mount Lofty Ranges,  Ivan Tiwu Copley. I had met Ivan on many previous occasions, mostly when he was presiding at events which commemorated the Peramangk people, something which has become increasingly regular I am happy to say, after an embarrassing silence of more than 150 years.

After a short but dignified service, which featured the music of Gurrumul, Ivan gave a talk on the Peramangk, before exiting and lighting his fire in a traditional ‘coolamon’. He wafted the smoke over the people with the feathers of the black cockatoo and a wedge-tailed eagle as they left the church, then smoked the interior after it was empty. We then moved to the adjoining hostel for more smoking and a feed. It was a deeply significant and moving afternoon, and much appreciated by the congregation of thirty odd people. 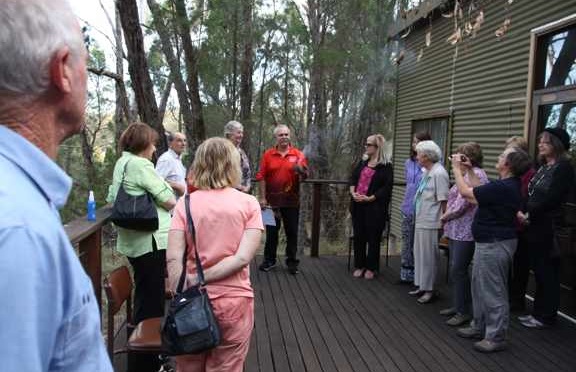 It was a pleasure to see Ivan  bridging the gap between two aspects of life in the hills which I have had a lifelong interest in. He was involved for example, in the installation of of a large and beautiful Peramangk sign along the south-eastern freeway, which greets visitors as they pass the nearby Mount Barker Summit and enter the heart of the traditional Peramangk land.

Finally, inspired by last Sunday’s experience, I did some more research on my ancestors’ involvement with Shady Grove, and I was delighted to discover that Frederick Charles Smith was the driving force behind the erection of the memorial to Captain Collet Barker in the township, in 1903.

I have had a life long fascination with Collet Barker, and have done a lot of research on him. Barker was a very close friend of Aboriginal people both at Raffles Bay in the Northern Territory, where he was stationed in 1828, and at King Georges Sound in Western Australia, in 1829-30, (modern Albany) before he was speared to death at the Murray Mouth in 1831. Kangaroo Island sealers were responsible for this tragedy, as they had been mistreating the mainland people, who took their revenge out on the innocent Barker.  (For more information on Collet Barker, see my ‘In Search of Collet Barker’ blog category).

I also discovered that Frederick Charles and I share a common birthday, the 24th June.